Senior managers have decided to implement a 2014 clause in County Council contracts.  The clause allows the Council to Lay-off all staff for a maximum of three days.  During the discussions with trade unions during 2013-2014, which led to this clause; it was termed by the management side as ‘unpaid Christmas leave’, as this was the period highlighted be senior management, when the Council would close and lay-off its staff.

During the talks the recognized Trade Unions sought assurances that the financial condition of the Council had to be ‘dire’, for the clause to be implemented.  At that time, Chris Malyon, Head of Finance envisaged that the only time this clause would be triggered, would be when the Council couldn’t afford to pay the employees wages, and we would be filing for bankruptcy.  UNISON Cambridgeshire has asked questions on these two issues, the response is that neither have been met or actioned. 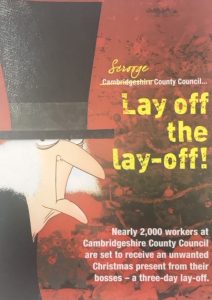 UNISON has already held meetings across the County with members and, begun a campaign to make members aware of the clause.  The Lay-off means a 1.2% cut in salary and, for the ‘average’ worker affected, will mean a £30 monthly deduction from your salary.  They give with one hand, whilst there is a scheme to take away with the other.  Alongside a 18% real terms pay cut since the start of austerity in 2010, the loss of incremental pay rise which were replaced by the grossly unfair performance related pay scheme.  Cambridgeshire County staff have paid dearly with their hard earned wages, it’s time we fought back!

What can you do

Please look out for the leaflet and keep the Lay-off on your and the teams agenda.

Write to or ideally visit your local councilor and MP  You can find who they are here: http://www.writetothem.com   Let them know how losing your pay rise will affect your ability to pay bills.  Your utility bills have not decreased over the last 8 years, the average family is now £900 worse off, due to energy price rises.

Get involved with your trade union and encourage your colleagues to join. Let your Branch know